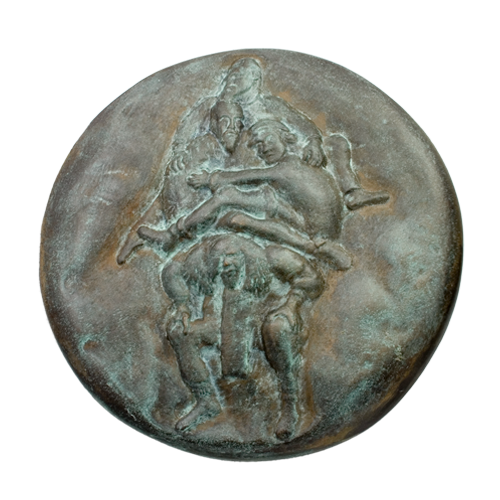 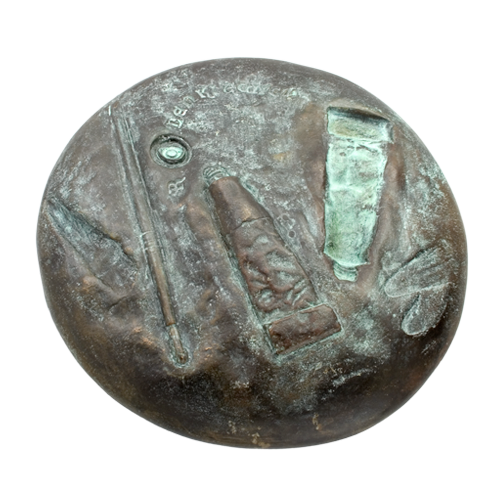 This medal, designed and modelled by Matthew Holland, commemorates the life of painter Robert Lenkiewicz (31/12/1941 – 5/8/2002), who worked for much of his life in Plymouth.  Cast in bronze by Lunts Foundry, it measures 120mm in diameter and weighs 1.25Kg.

The medals are individually numbered of a limited edition of 50, and come with a certificate signed by the artist. Each medal is carefully finished and patinated. The artists initials (MGH) and the medal number is stamped on the side.  The medal is available to buy by clicking here…

I met Robert Lenkiewicz several times. After our first meeting I decided to ask him to consider making a plaster model for a medal. Trying to contact him wasn’t easy so I decided on an unusual approach. I sent him a box of carrots with my phone number on. He didn’t reply, but it did make him curious enough to speak to me when I went to his studio and he accepted an invitation to my workshop, and to lunch afterwards. He was very gracious. We ate lunch in my parent’s garden on a warm day in the summer. He wore his usual black clothes and red scarf. He was intrigued about the idea of making a medal, particularly a ‘memento mori’, but not sure when he would find the time since he had a lot of other obligations to fulfil.

There were a few dates pencilled in for a bit of plaster carving practice, but other pressures meant that it never actually happened before he died.

After his death, I had some discussions with members of the ‘Lenkiewicz Trust’ and ‘The Friends of Robert Lenkiewicz’ about producing a medal. They were interested but could not afford to help market one. Rather than attempt something along the lines of Robert’s idea of a ‘memento mori’, they were keen to use the ‘holy trinity’ sketch and in a fit of enthusiasm, I carved the obverse. Other events caused me to shelve the project.

In 2011, I completed the model and had some cast in bronze. They have been exhibited at FIDEM XXXII Glasgow 2012. (International Art Medal Federation)

The obverse of the medal shows my carved version of his watercolour sketch, which depicts Rembrandt, Michelangelo and Nietzche. There is a picture of this sketch in a book about his life (‘R.O. Lenkiewicz’ published by the White Lane Press).

Alongside the sketch are some notes which read,

“How heavy is the childhood load? At eleven, Rembrandt climbed up – at twelve Michelangelo, at thirteen Nietsche; and so it went on. And that odd little trinity has balanced there – always precariously – for a long time now. Have I become bow-legged? How bow-legged could a civilization become? A soldier, lover or a painter..?”

I think he meant that during his early teens he felt overwhelmed by the brilliance of the abilities and thoughts of these three people.  I think that their work inspired him to drive himself to the utmost.

The reverse of the medal shows how I think of Lenkiewicz…. tubes of paint. I think of him as a prolific painter, always painting… day and night…regardless of the temperature or conditions of his Plymouth studio, and these tubes of paint are the things that surrounded him most of the time.

Though he was a researcher, an avid book collector and philosopher, I think most of us remember him as ‘the painter on Plymouth Barbican’. I think he pushed himself to continually paint. He felt the need and the desire, like an obsession. He felt the ‘weight of paint‘.